Here we have John, who turned out to be very entertaining during the week to come (and being British, the reason the next walks are done in English), as well as Jeethree with dog Gamin in Bredevoort, first for coffee, before we go on our first walk. The weather was splendid, in contrast to the week before!
Then something incredible happens. There is a window with a display of English language books, and only a few of them too, (Bredevoort is known for selling secondhand books everywhere). Right in the middle is "A history of the Guillotine" which was actually the subject of John's lecture later in the week, and his reference book for it! Do you believe something like that?
Ms Applepie, pay attention: Jeethree would like such a plant for her new house. Do you have any idea what it is?
Then we make a tour round the village, there is some kind of blue alge in the water, it says in red (i.e. danger, don't touch the water, which we were not about to do in the first place).
You can clearly see the tea-house ghost, next to John! Which only showed up on the photograph of course, but now we know that the little tea-house is haunted:-)
There are plenty of herbs next to the cosmea, I think I fed John some fried eggs with herbs from this place a few days later for breakfast:-)
a wonderful day with a wonderful view!
We then speed to the mediaeval restaurant to have lunch: their famous warm applepies:-) After all, it was holiday (I was having a sabbatical this week or call it a mini-mini conference in astrology. 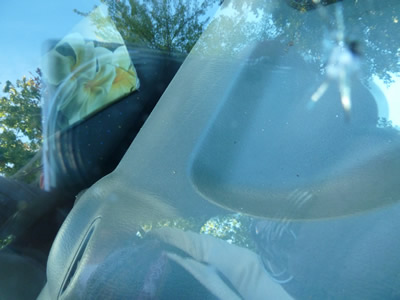 And this artistic picture is a story by itself. The day before I was shot at when driving the car, just below Zutphen. Or at least, that's how it felt. The result was a big star in the screen which had to be fixed later in the week. In fact, I didn't even see the star until this Monday when John mentioned it.
After lunch, we drive to Zelhem someplace, meet up with Ron (photo #22 meantime), and go for a walk in the woods over there.
Ron, John and Jeethree and on the right some weird fungus.
Zelhem woods.
Ha finally, a seat! (I have no idea what "bankje" is in English, a bench?)
While Jeethree is dancing, John & Ron discuss the latest in healing. Gamin is happy.
God knows what they are doing here, maybe waiting for John taking pictures of funghi. With Neptune in the 8th house John is contemplating a new job as photographer for models:-)
It is entirely possible that these chemtrails (which apparently are called something else in England) were seen in the sky during our next walk and not today, so on towards the next walk the next day then.
Home
Next