The Royal Oak and his family (biggest Oaktree in the Netherlands), Wednesday September 30, 2015

Mullein on our path towards the Oak (& family), but of course on our way back I forgot it (and didn't even see it then..)
We ask our questions for this pilgrimage to the Oaktree overseeing the entrance path of the estate.
When I ask the horsepeople if I can take a photograph, these idle folks stop and pose!:-)
We continue our journey, on again a beautiful sunny day.
After a while we turn to the right to enter a mystical path. We ask this big Beech in the beginning whether he will grant us permission to enter another dimension here and he quickly gives his okay energetically!
John, nicely surrounded by sunspots, feels heat coming from the beech when he also ask permission, and since beeches usually emit cold, this is a yes as well!
We proceed in silence.
The other dimension usually reveals itself here on the way back, but today we are not taking this path when returning. It was mystical enough here though, a path or walk full of expectation as we proceed towards the big oak.
And here he is, the wise grandfather Oak, over 500 years old. So I tell John that once I "talked" to him, when Pluto entered Capricorn, knowing he had been through such passages twice before already, and asked Oak what the purpose of Pluto in Capricorn was. Whereupon he answered that in this timeframe everybody can find there true roots i.e. where to live. (Writing this when Europe is flooded with Syrian people....). But anyway John may want to go live in Prague and if he does, I will go visit him:-)
I told John that I usually and Indian-ritual like,  walk round the tree three times, which I did not today. Funnily enough John said he had contemplated doing so, and then he goes around it.
Behind John is the grandson of the big Oak - in 500 years time he has to take over the position of the grandfather. We then proceed over a bridge to enter a more lunar realm, where grandmother Beech, married to grandfather Oak, resides.
And here she is, Grandmother Beech. It is a red Beech, and her energy is quite Neptunian.
There is also a little hill across some water there, where the spirits of these woods reside, so I was told by an Indian woman - kind of - once. It would of course be in the lunar region of the woods where they are, not in the solar part where the big Oak is.
One tree cut up already and another waiting for it.
It had been hit by lightning you see. As we walk to Uncle Frits, another tree completely dead though, there is a signpost to the House. Normally I walk in the other direction for the Twin-Douglas, but I was told they serve coffee in the house, and we were quite ready for that.
It wasn't far off. John spots a sequioa on the grounds there.
And yes, we were served coffee by the landlord himself & felt quite royal:-)
Going back we take another route.
Then we see a shop supposedly with produce from the estate, but the shop was mainly filled with antique stuff from a supermarket decades ago, for fun and not for sale. They did have Notary Apples though, biological, so I bought a few of those. 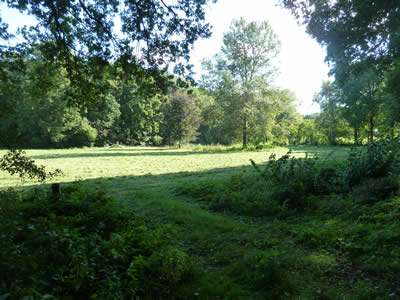 From Notary to a lawyer it was today:
Our restaurant in the evening had one translation of  the menu in English. For desert, we had Chicken egg, i.e. icecream with LAWYER:-))))))) But it tasted so good, that I bought  bottle of LAWYER meantime:-))  (Little old , on the menu, means: for the kids:-)))) We had a ball!